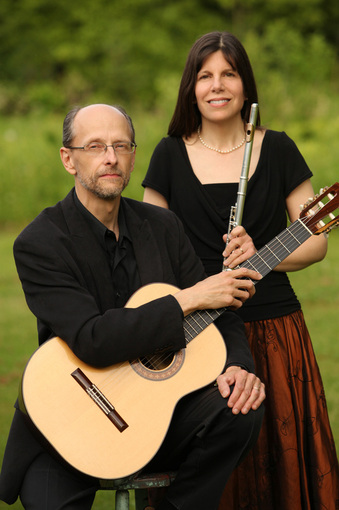 A husband and wife team playing flute and classical guitar, the Matthews Duo performs an eclectic palette of traditional and ​and contemporary music for these instruments. Their repertoire includes a mix of both standard classical pieces, Latin American music, their own arrangements of traditional, popular, and hymn tunes, as well as recently composed music. Their performances are lyrical and intimate, yet peppered with virtuosic passages, exotic harmonies, heartfelt solos, and expressive ensemble playing.

Classical guitarist Peter Matthews is active as a performer and teacher.  Involved in solo and chamber work, he has performed and recorded with Vermont Contemporary Music Ensemble, Vermont Virtuosi, with the vocal ensemble Counterpoint, and with his wife, flutist Wendy Matthews, in the Matthews Duo and Frevo quartet.  He has appeared on Innova and Albany Records. Peter holds a MM in performance from the University of Akron School of Music where he studied with Stephen Aron  and was a prize winner in the Stroud Competition.  He also pursued post-graduate studies with Thomas Patterson at the University of Arizona. He has been on the faculty of the University of Akron School of Music and  Western Reserve Academy.  Currently he teaches in the Northeast Franklin Supervisory Union in Vermont  where he received special recognition for his work there by the Vermont Alliance for Arts Education.

In addition to performing in the duo, flutist Wendy Matthews also plays in the VCME Crossover Ensemble, Frevo. She is an alumna of the Walnut Hill School of Performing Arts, holds a Bachelor of Arts degree in music from Bennington College where she studied flute and composition, received her MM in performance from the University of Akron, and studied in the post graduate program at the University of Arizona. She has performed with the Cleveland Composers' Consortium, Warebrook Music Festival, Northern Winds, and various orchestras and chamber ensembles. She has studied with flutists George Pope, Julia Bogorad, Bettine Clemen, Philip Kaplan, and Nancy Sanderson. Dedicated to sharing the tradition she has acquired from them, she has taught at the University of Akron School of Music, Western Reserve Academy, and Rymer School of Music. She currently maintains a private flute studio and teaches at Northern Vermont University-Johnson. Originally from rural upstate New York, she and Peter live in northeastern Vermont with their children.